Where are the Women in ART?

By Courtney McDermott
Can you name three female visual artists? Artist and filmmaker Lynn Hershman Leeson posed this challenge in her documentary !WomenArtRevolution, which relays the feminist art movement of the 1960s and 70s. I happened to come across this documentary on Netflix, when I was, naturally, procrastinating from my own art—writing. One of the most compelling, albeit horrifying, clips in the film was the opening clip when Leeson interviewed people coming in and out of the MET on the above question. Other than the notorious Frida Kahlo, people were at a loss.
I felt smug. What about Mary Cassatt? Or Georgia O’Keeffe? Or Diane Arbus? I thought, but I acknowledge I have an unfair advantage—my mother was an art teacher, and I’ve been frequenting art museums since I was a baby. Even with that fortunate upbringing, I was still hard pressed to name many more than three artists.
The documentary highlighted such fascinating works by Judy Chicago, Nancy Spero, and Hannah Wilke. As a writer, other artists intrigue me, so I became concerned that maybe the female artist is still threatened, still overlooked and unheard. Even in the literary world, the most oft-cited females these days are Stephanie Meyers and E.L. James (and don’t even get me started on them). The other day, a friend of mine (a smart, educated, witty woman my age) posted on her Facebook wall a link to the 25 best quotes on writing. Most of them were pretty fantastic. Only two of them were by women.
Obviously, this is just one webpage, and it doesn’t mean that women don’t have great things to say about their art. They just aren’t being quoted or cited, or even taught.
Last year, I taught English in the most hellatious prep school imaginable. I left mid-year for a number of reasons, but one (and not an insignificant one) was that I felt at odds with the curriculum being taught. In freshman English, only one poem on the entire curriculum was written by a woman. Nothing else. In American literature, in order to adapt to the new trimester system, a number of books had been cut from the curriculum. They axed Toni Morrison and Kate Chopin; Emily Dickinson was the one remaining female voice. We all need an Awakening! I tried to protest, but my indignation was met with silence.
Silence has been the enemy of the female artists, so I was more than delighted to read the myriad news articles recently on Pussy Riot and their artistic reaction to the Putin regime. A number of YouTube comments derided the type of music, declaring that these women weren’t making music or art. I disagree; they have a point of view, they use an art medium, and they are reaching people. They’re artists. And they just happen to be women.
The Pussy Riot incident (and no one was more gleeful than I to hear the words Pussy Riot uttered from the mouths of congressmen and women) propelled me to search out other female artists. Like Lena Denham and her hit HBO series Girls. I like this series so much Dunham gives voice to an array of 20-something women, without glamorizing their lifestyle. I get the distinct sense that I would be friends with Dunham if I ever met her.
Then there is the Living Walls project in Atlanta (a project that encourages street art to enliven dilapidated neighborhoods), which only commissioned female artists this year. The fact that an art show must intentionally create a female-only show highlights how much women have been overlooked in the art world.
In my daily life, I write. But I decided to turn towards my childhood roots and create visual art. After watching !WomenArtRevolution, I scribbled down half a dozen ideas for drawings. I first completed the drawing, “Alone in this Duet,” and upon completion, I pulled out more art supplies, and I finished “Mutilation.” 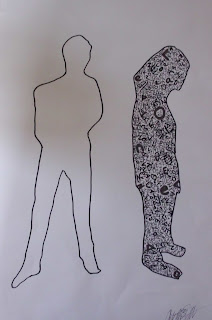 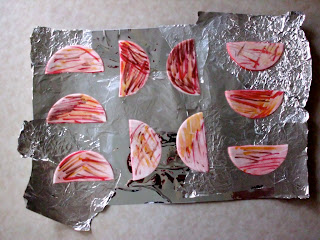 Don’t worry, I won’t quit my day job, but the very act of creating something, giving a physical body to the feelings and frustrations and delights I keep inside, is pretty liberating. Writing is my personal trick card that I need to pull out more often, because it lets me state what I think is important. I have decided to turn to my Twitter page (which has been underused and ignored) and devote its contents to the expression, support and acknowledgement of female artists (@courtmcdermott). Because women are out there making art, and as a woman, I find it not only important, but necessary to our very survival to acknowledge and teach about these artists, so that when someone else asks the question, “Can you name three female artists?” the answers will come readily.
Hand over the crayons and the pencils, the violin bows and the paint cans, and let all girls, all women, create some art. In fact, I think I might go create some art now.

Pam Wojcik
I am Professor of Film, TV and Theatre and Director of Gender Studies at the University of Notre Dame. I am author of THE APARTMENT PLOT: URBAN LIVING IN AMERICAN FILM AND POPULAR CULTURE, 1945 TO 1975 and GUILTY PLEASURES: FEMINIST CAMP FROM MAE WEST TO MADONNA. And I am editor of NEW CONSTELLATIONS: MOVIE STARS OF THE 1960S, MOVIE ACTING: THE FILM READER, and coeditor of SOUNDTRACK AVAILABLE: FILM AND POPULAR MUSIC.